History of the WPD

In March 1879, the City of Watertown was formally organized. In 1880, John Johnson was appointed as the first Town Marshal of Watertown and he served in that capacity until 1882. Watertown’s next Town Marshall was O.F. Vaux and he was succeeded by J.J. McMath in 1883. On June 16, 1884, the first county court house and jail was completed. Whether or not the jail was also used by the city is not known. Most likely that was the case as Watertown was quite small, being in existence for less than 10 years.
Watertown’s next Town Marshal was James Wiley in 1885. George Carpenter succeeded Wiley and served as the Town Marshal between 1886 through 1888. On May 26, 1890, the first City Council meeting was held in the new City Hall which was located on West Kemp Avenue. The City Jail was located in City Hall and H.D. Bennett served as Town Marshall (1889 through 1891). The population of Watertown in 1890 was 2,672. The first Watertown Police Department was located in City Hall on the corner of West Kemp and 1st Street West. Today, the Hi-Rise apartment building occupies that location.
From 1891 through 1909, there were fifteen more individuals who served as Town Marshals. The population of Watertown in 1900 was 3,352. In 1909, Marshal John Keegan was appointed as Watertown’s first Chief of Police. Chief Keegan served as Chief of 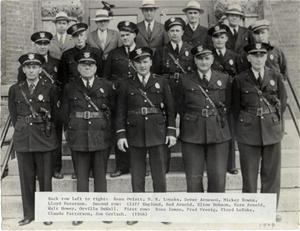 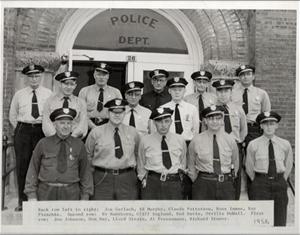 Chief LeVake was Chief of Police until 1955. He was succeeded by Claude Patterson. The fourth photograph of the Watertown Police Department was taken in 1955. The population of Watertown was 12,699. The location of the Watertown Police Department was still at the corner of West Kemp Avenue and 1st Street West. The size of the police department grew to thirteen officers under Chief Paterson.
In 1961, Claude Paterson was Chief of Police. The population of Watertown was 14,077 and the police department grew to fourteen police officers.
Chief Patterson retired as Chief of Police in 1963 and he was succeeded by Clifford Englund who served as Acting Chief until 1964. Thereafter, Lloyd Strain was

appointed Chief of Police in 1964. On October 24, 1966, the old City Hall and Police Department on West Kemp was in the process of being torn down. At this time, the Watertown Police Department was relocated to the City Auditorium located at the corner of Broadway and 2nd Avenue South.

The city jail was also located in the basement of the building. The size of the police department remained at fourteen officers and Chief Strain.
Chief Strain served as Chief of Police until 1970 at which time Alvin Freesemann was appointed Chief of Police. In 1970, the population of Watertown decreased to 13,388. However, the size of the police department grew to twenty officers under Chief Freesemann.
In the fall of 1973, the construction of the Codington County Detention Center was initiated. In the photograph depicted below, the department members are seen standing on the stage in the City Auditorium Building.

Chief Freesemann remained Chief of Police until 1975, at which time Lloyd Strain was reappointed Chief of Police. In 1975, the Watertown Police Department moved from the basement of the City Auditorium Building to the Codington County Detention Center located at 119 South Maple. The total cost of the building was $675,000. In July 1975, area residents had the opportunity to tour the new facility which housed the police, sheriff, highway patrol, jail facilities, and the civil defense center. On October 26, 1975, the 911 Emergency Telephone Number was operational in Watertown. This same year Watertown Police Department created the position of Detective.
In the 1975 photograph depicted to the right, officers are seen standing on the access ramp in front of the new Watertown Police 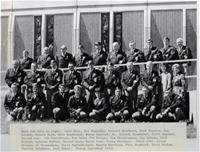 Department.
The size of the police department grew to twenty-three officers and Chief Strain. There were twelve Patrol Officers at that time. In September 1975, the department hired two female civilian clerks who worked in the Records Office. Additionally, in January 1976, another female was hired to serve as the Chief’s Secretary. Depicted in the photograph below, were two female Meter Maids who worked for the department from 1965 through 1978. Additionally, the position of Animal Control Officer was created in approximately 1975 and came under the direction of the police department.
In October 1978, the parking meters in the uptown area were removed. Therefore, the Meter Maids’ jobs became obsolete and the positions were eliminated.
In November 1978, Chief Strain was appointed to Safety Director and served in that capacity until 1980. Then Dennis Eisnach was appointed Safety Director in 1980 and served in that capacity for less than one year. In 1980, LaVerne McPeek was appointed Chief of Police. At that time, the population of Watertown grew to 15,649.

In 1982, the size of the police department grew to twenty-six officers under Chief McPeek. There were fourteen Patrol Officers at that time. The females depicted in the photograph below are civilian clerks who worked in the Records Office. One of the females served as Records Manager and the Chief’s Secretary.

By 1988, the size of the force and civilian staff remained consistent with previous years. There were fourteen Patrol Officers. However, the position of Traffic Maintenance Worker was created in June 1988 and came under the direction of the police department.
In 1989, the Watertown Police Department began its first use of computers. Six computers were purchased and the first computerized Records Management System was utilized. This system was a DOS based program called “CLEM.” Some officers began to slowly use the personal computer; however, the majority continued to write police reports by hand. The Watertown Police Department, under Chief McPeek was very pro-active on fingerprinting children, inspecting scout groups, and talking to many groups and explaining the WPD’s mission.
In 1990, the population of Watertown increased to 17,623 and the number of Patrol Officers increased to fifteen. A female civilian Dispatcher was hired and added to the force in April 1993.

In March 1994, a second female civilian Dispatcher was hired. This increased the number of Dispatchers to two. Chief McPeek retired in March 1994 and Kenny Larson succeeded him as Chief of Police. The first female police officer was hired in January of 1995. Two officers were hired under the COPS grant and three additional officers were hired in the following two years. The second female police officer was hired in July of 1996. The size of the police force grew to twenty-nine officers under Chief Larson. The civilian staff included one Records Manager/Chief’s Secretary, two Records Clerks, one Animal Control Officer, one Traffic Maintenance Worker, and three Dispatchers. The rank and file included Chief Larson, two Assistant Chiefs, three Captains, four Sergeants, three Detectives, one Juvenile Officer, and sixteen Patrol Officers.
Community Policing continued as well as the creation of the D.A.R.E. Program, and a SWAT Team. Law enforcement was changing very rapidly with new ideas and technology. During Chief Larson’s tenure the rank of Captain was specialized (Crime Prevention, Patrol, and Administrative). With these ranks came specialized training for crime scenes, accident reconstruction, and all aspects of administration, which allowed officers to seek the training they desired within a specialized field. Mayors Hopper and Barger as well as retired Chief LaVerne McPeek, while serving as a City Council member, were intense in the sponsorship of training and community policing programs. For the first time in sixty years, the WPD was able to send an officer to train at the F.B.I. National Academy.

Chief Larson retired in 1998 and was succeeded by Terry Lohr. In 2000, the population of Watertown increased to 20,237. Under Chief Lohr’s administration, the department continued to embrace the concept of community policing, and the following programs were initiated: Crime Free Multi-housing Program, DARE, Adopt-A-School Program, Explorer Program, and the School Resource Program. With the initiation of the School Resource Officer Program, an additional officer was hired which increased the size of the police force to thirty officers. The rank and file included Chief Lohr, two Assistant Chiefs, three Captains, four Sergeants, three Detectives, one Juvenile Officer, one School Resource Officer and sixteen Patrol Officers.
In addition to the new community policing programs, Chief Lohr initiated a range of services available to the citizens of Watertown, to include the following: Traffic Accident Reconstruction & Investigation, Crime Scene Investigation, Hostage Negotiation Team, and Internship Program. Although the services made available to the public significantly increased under Chief Lohr’s administration, with the exception of the addition of the School Resource Officer’s position, the number of Patrol Officers remained the same—sixteen Patrol Officers.
Between 1998 and 2002, the number of Dispatchers increased from three to eight. Prior to this time, Sergeants performed the dispatch function. The 911 Dispatch Center became its own operation with its own budget. A Computer Aided Dispatch System (CAD) was implemented. With the implementation of the CAD, the police department gained the ability to automatically track the number of calls for service. The 911 Dispatch Center also sought out partnerships and began entering into contractual agreements to provide 911 dispatch services to neighboring counties. The 911 Dispatch Center provided services for Codington, Day, and Hamlin Counties.
The civilian staff of the police department remained the same and included the following: one Records Manager/Chief’s Secretary, two Records Clerks, one Animal Control Officer. Under Chief Lohr’s administration, the tragic events of September 11, 2001 occurred. Homeland Security became a priority for police departments nationwide. On November 19, 2001, the President and Congress enacted the Aviation and Transportation Security Act (ATSA) which established TSA as a new Federal agency. The ATSA included ordering the deployment of law enforcement personnel authorized to carry firearms at each airport security passenger-screening location to ensure passenger safety and national security. In essence, this required the police department to deploy sufficient law enforcement officers to the airport whenever flights arrived or departed from the Watertown Airport.

department training. Three existing Patrol Officers were elevated to Corporal and helped the Patrol Sergeants act as front-line supervisors. The 911 Dispatch Center added a part-time dispatcher and was providing 911 services to Codington, Hamlin, Day, Grant and Roberts Counties.
The Watertown Police Department reached out to the public in March 2007 in order to solicit funds to purchase a K-9 Drug Dog for the department. The amount of donations and grants from the pubic and local businesses was overwhelming. The National Association of Chiefs of Police and the Attorney General’s Office also contributed financially. The Attorney General’s Office provided a vehicle and related equipment for the K-9 Team. These donations allowed the department to purchase 2 drug dogs. The Police Department’s first K-9 Drug Team was established in February of 2008.
In 2009, three additional Communications Officer positions were made possible through grant funds, bringing the total number to twelve. Additionally, an IT position was created and filled to manage the ever growing computer network infrastructure.
Two significant changes occurred in 2011; the organizational chart was restructured and WPD moved into a new building. The restructuring mostly involved shifting some responsibilities among the command staff and renaming the divisions. The new structure called for an Operations Bureau which consisted of the Patrol and Investigative Divisions which were supervised by the Assistant Chief. Each of the three captains was tasked with commanding a newly titled division. Professional Standards included training, policies, grants, and the Citizens’ Police Academy. Special Operations covered the K9 Program, the School Resource Officers, special events, and youth programs. Support Services encompassed the 911 Center, the Records Unit, Information Technology, and maintenance of vehicles and the new building.
In July 2011, the WPD moved into its new location at 128 N Maple St. This moved marked the first time the WPD had a building of its own. Up to that point, the WPD had always shared space with another City or County entity. The new building was nearly 38,000 square feet and included all the latest equipment necessary to perform modern police functions.
In 2013, Joanna Vitek retired, and Lee McPeek was appointed Chief of Police. In January 2021, the WPD received four new patrol officer positions through a grant from the USDOJ Office of Community Oriented Policing.  Those new positions allowed the WPD to create Mental Health Officer and Community Service Officer positions.  Tim Toomey replaced Lee McPeek as the Chief of Police in April of 2021.  At present, the WPD is staffed with 40 police officers, and 19 non-sworn support members.